The study aimed was to analyze the effect of board size (UDD), capital structure (DER), and dividend policy (DPR) used as independent variables and firm value (PBV) used as the dependent variable. The data used are secondary data in the form of financial reports and annual reports from 2013 to 2017. The samples in this study were 100 companies listed on the Indonesia Stock Exchange.

This work is licensed under a Creative Commons Attribution-NonCommercial-NoDerivatives 4.0 International License.

Most read articles by the same author(s) 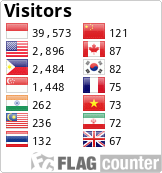